PUBLISHED IN THE CHICAGO TRIBUNE APRIL 24, 2015 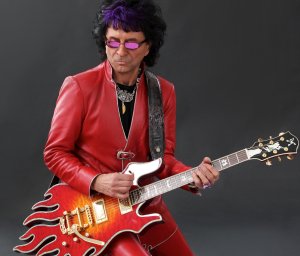 The Grammy-winning artist Jim Peterik will deliver an intimate solo acoustic performance at 7 p.m. April 26 at the Chicago Street Theatre.

Peterik is best known as the founder of the band Survivor. He was a vocalist and songwriter of the hit song “Vehicle,” by the Ides of March. Peterik, a Chicago native, is also famous for writing the anthem “Eye of the Tiger,” the theme for the motion picture “Rocky III.”

Peterik said he is thrilled to be back in Valparaiso. “I believe this is my 15th year performing at Chicago Street Theatre. It’s always a great time.”

Peterik plans to take “an unplugged, storyteller’s approach” he said, “doing the biggest songs of my career with a stripped-down version to tell the stories behind the songs.”

The audience will hear the stories behind songs such as “Vehicle,” Eye of the Tiger,” “The Search is Over,” “Hold on Loosely,” “Rocking Into the Night,” “Heavy Metal,” “L.A. Goodbye,” and many others from his near 50-year career.
Peterik will also be premiering a brand new song, “The Same Muse,” the idea for which came to him while watching The Easter Parade with his wife, Karen. “We were engrossed by these legends like Judy Garland and Irving Berlin. If Irving Berlin were still alive today, he’d be writing songs for Katy Perry,” Peterik said.

At the show, guests can pick up a signed copy of the 50-year boxed set for Ides of March, a deluxe, limited edition 5-disc set. Fans can also purchase an autographed copy of Peterik’s new autobiography, “Through the Eye of the Tiger”.

Beth Casey is a freelance reporter for the Post-Tribune.