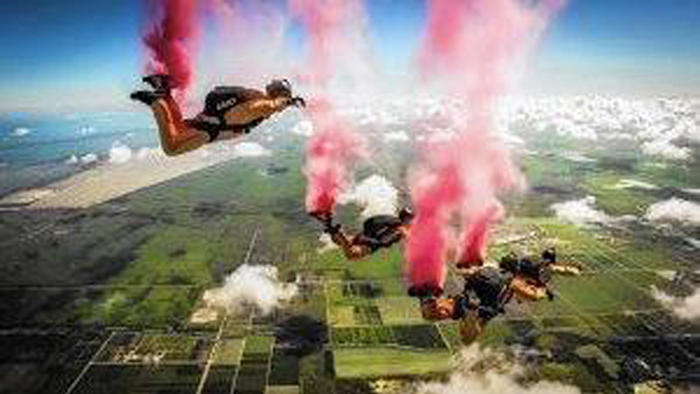 PUBLISHED IN THE CHICAGO TRIBUNE JULY 9, 2015

The city of Gary is bringing back the high-flying acts of the Gary Air Show at Marquette Park on July 11 and 12.

Talent and attractions of this year’s lineup include the United States Air Force Thunderbirds, a tightly choreographed aerial demonstration of close-flying fighter jets, and the U.S. Army Golden Knights (also known as the U. S. Army Parachute Team), who will be dropping by for a demonstration.
The Gary Air Show will also have numerous vendors from the northwest Indiana area including 18th Street Brewery, Amazing Grace, Big Daddy’s BBQ, Carroll’s Corn Crib, Friendly’s Catering, Kona Ice, Ste. Marie Concessions and Thunderbirds.

Chelsea Whittington, event director of the Gary Air Show, said she is very excited for the show to be coming back to the Gary area.

“I’m most excited about its return. The Air Show has been on hiatus since 2012,” Whittington said. “I’m also excited to have it in Marquette Park. Now that the $28 million renovation is complete, we can use all the amenities it has to offer.”

The Gary Air Show brings with it a lot of northwest Indiana pride and enriches the community.

“First and foremost (the air show) brings pride to the community,” Whittington said. “People usually only see air shows from the shores of Chicago. We are proud of our event, our home and our air show and invite all to take part in a family-friendly, fun-filled event.”
Certain items are not permitted at the Gary Air Show. Those items include: firearms, coolers (unless it is used for life-saving medicines and/or baby formula), alcoholic beverages, contraband, barbecue grills and cooking equipment, pop-up tents, extra-large backpacks and duffel bags, large handbags (restricted to a maximum of 8 by 10 inches), animals or pets (service animals permitted), fireworks, radio-controlled devices, bicycles, roller blades, roller skates, skateboards, scooters and any other items security personnel deem a security risk.
“We want people to be safe and don’t want coolers or grills to be confiscated at the gate by police,” Whittington said as she stressed that more dos and don’ts of what to bring are laid out online at gary-airshow.com/category/item-restrictions.

Beth Casey is a freelance reporter.