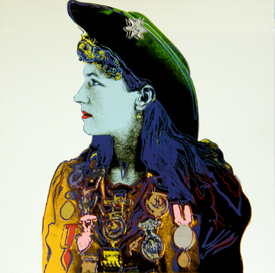 Published in the Chicago Tribune, April 8, 2015

Published in the Chicago Tribune, April 8, 2015

From April 15 through May 10th, the Brauer Museum of Art at Valparaiso University will be showing screenprints by Andy Warhol, a part of their permanent collection, in the Ferguson Gallery.

Gregg Hertzlieb, Director and Curator of the Brauer Museum of Art, gave insight of how the Warhol pieces came to be at Valparaiso University. “All Warhol pieces are from our permanent collection. A number of years ago, we applied to be a university recipients of Polaroid and black and white photographs by Warhol. We were surprised when we received one hundred Polaroid’s and 50 black and white prints.”

The Brauer Museum of Art lucked out not once with donations from the Warhol Foundation, but twice.  “Two to three years later, they contacted us to see if we’d like more. Weeks later, in the mail, we got screen prints. We were more than thrilled about this. It enhanced our collection enormously. Since we have a wealth of prints, we decided to do a show,” Hertzlieb continued.

This iconic collection is curated by student Kevvie Simonsen and recent graduate, Kayla Nomina. According to Hertzlieb, the collection will feature a mix of art forms. “Nine of the pieces will be screen prints and six photographs will balance the collection,” said Hertzlieb.

Not only are the students excited to have the opportunity to work with the prints, but the community is equally lucky to have a chance to view these parts of the Warhol collection. Hetzlieb spoke about how inspired the students were recently by the works, “I was working with interns the other day as we were matting them. The students were so thrilled to be working with Warhol works.” Hertzlieb continued, “As great as it is for students to be working with these, I believe that the public will be happy to have a chance to experience this in a local museum.”

The Andy Warhol exhibit will be featured in the Ferguson Gallery at the Brauer Museum of Art at Valparaiso University. The exhibit is open to the public from April 15th through May 10th and admission is free.